fDisclosure / Disclaimer: I received this ebook from the author, free of charge, for review purposes on this blog. No compensation, monetary or in kind, has been received or implied for this post. Nor was I told how to post about it, all opinions are my own 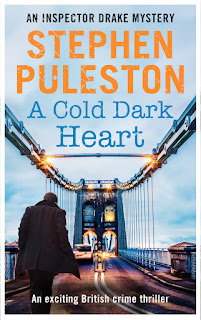 Drake’s most dangerous killer and shocking case yet…
Accident or murder...?
When eighty-nine-year-old Emyr Isaac is found dead in his home, Drake and his team initially suspect a burglary gone wrong.  Isaac was old, and his death was a tragedy, but it’s not a murder case…is it?
A grisly discovery...
Drake uncovers more suspicious deaths, all elderly victims, all seemingly innocent, but with one chilling connection.
A twisted killer...
If Drake’s suspicions are correct, they have a dangerous serial killer on the loose. Soon, the team realise that stopping this killer will require playing a dangerous game - how do you catch a murderer trusted by everyone?

This book is a book about opposites- Drakes new boss/his old boss, his ex wife/new girlfriend, welsh/english, evil/goodness, season cop/new cop. An it breathes new life into the series, as what seems like a simple case of accidental death turns into something much more evolved, that seems to vex his squad with each new discovery. With plenty of red herrings and thrills, this book is a real page turner for those new to the series, and those faithful to every book in it.

I write mysteries and thrillers.


You can read about my writing and about Wales, one of the most beautiful countries in the world, on my website - www.stephenpuleston.co.uk.


For many years I worked as a lawyer in a small practice representing clients in the criminal courts and doing divorce work all of which has given me valuable raw material for my novels.I still live and work in North Wales where the Inspector Drake novels are set.
bless their hearts mom at 12:06 PM
Share