Book Review: The Only Good Indians by Stephen Graham Jones

Disclosure / Disclaimer: I received this ebook from Gallery Press, via #Netgalley, free of charge, for review purposes on this blog. No compensation, monetary or in kind, has been received or implied for this post. Nor was I told how to post about it, all opinions are my own

A tale of revenge, cultural identity, and the cost of breaking from tradition in this latest novel from the Jordan Peele of horror literature, Stephen Graham Jones. 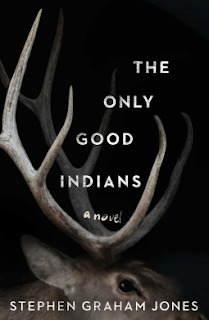 Seamlessly blending classic horror and a dramatic narrative with sharp social commentary, The Only Good Indians follows four American Indian men after a disturbing event from their youth puts them in a desperate struggle for their lives. Tracked by an entity bent on revenge, these childhood friends are helpless as the culture and traditions they left behind catch up to them in a violent, vengeful way.

Remember when you first reading The Shining, or It, and the SURPRISES could truly shock you, and the horror was as much psychological as it was real, and that was why the books stayed with you for so long? Now add those emotions and add a Native American supernatural element, and you've got the bones of this story. Both dark and relatable, it's the story of making a bad decision and how it stays with you- karma, in this case CAN be a real killer. But how real is it? With innocents in the crossfire, their is a race for completion. Stay with this book until the end, for a book not to be read at night!

Stephen Graham Jones has been an NEA fellowship recipient, has won the Jesse Jones Award for Best Work of Fiction from the Texas Institute of Letters, the Independent Publishers Award for Multicultural Fiction, a Bram Stoker Award, four This is Horror Awards; and has been a finalist for the Shirley Jackson Award and the World Fantasy Award. His work has also been named one of Bloody Disgusting’s Top Ten Horror Novels, and he is the Ivena Baldwin Professor of English at the University of Colorado Boulder.
bless their hearts mom at 10:50 AM
Share