I was recently given the opportunity to review a childrens' Twirl skirt sewing pattern from Squiggly Twig Designs!

I know I know,my dear readers, you had NO idea I could SEW. Well, I had a traditional Southern mother and a Yankee (egads!) grandmother who was a master seamstress. So guess who knew how to sew before High School Home Ec class, hmmmm???? I really have only been creative sewing the last 6-7 years- primarily quilts- but I got the bug a few months ago when a local discount store had tons (literally) of fabric on huge markdowns and I saw the potential for cute items for darling daughter (there was also the sticker shock of some of the 'designer' clothing for little girls. I mean really, $52 for 1 yard of fabric twirl skirt? No offense, I don't have that type of budget for darling dear!

So when the chance to get a free pattern came up, I knew I had 2 boxes of already washed (habit- I always wash when I get home, that way it just needs ironing when the mood strikes to sew) material ready to go and I jumped at the chance to get my feet wet again!

Squiggly Twigs Designs has some adorable patterns, but Debbie was trying to parcel out different reviews and I needed a quick and simple one, so I had chose of the peasant dress, pants or twirl skirt. The dress was already taken when I got back to her, so I chose the skirt as you can always use a twirl skirt pattern!

The patterns are downloadable, saving you from having to wait and wait for a paper pattern to arrive at your house (or not arrive, lets just say some of are STILL having issues with UPS). So you can make your own pattern on whatever material/paper you like (which is so cool to me!).

The pattern was easy to download and was very simply laid out. My only wish was that there was page numbers on them (my 2 year old dropped them TWICE-luckily I was able to piece back in order easily, but a novice sewer would have had to go back to the download to check).

I chose a fall pattern (keeping with the Welcome to Fall Ya'll theme) that had the Peanuts gang on it. It's a basic cotton, which means it will be easy to pre-treat stains on (love that the pattern will disguise most of them) and wash/dry. I had a secondary fabric, but decided against combing patterns after I started the skirt.

The pattern starts with you taking your child's measurements and then using them to determine how much material you will need. I followed Debbie's formulas easily, but when looking at the measurement on the material, I knew I had a problem. It wasn't the pattern- it was that my daughter in on the petite, long legged, no but, no waist side (i.e. still wearing her 18-24 month pants, they're just capris on her). Knowing 80 inches of fabric for a twirl skirt would just overcome her, I cut the measurement by a third and was happy with my result. I could have cut less, or left it alone, but I know my kid and knocking off a third was right in line with her store bought twirl skirts that she likes. The formula would have worked for a normal sized child. The pattern didn't tell me this, this was just how I knew to alter a pattern (I know if you emailed Debbie she would tell you the same advice). Most patterns don't tell you about 'alterations'- they expect if you have experience, you will just do it, so it's not Debbie's fault-what she had was a standard formula. I liked that the pattern was based on my child's measurements, not a preconceived idea of what they should be (like your traditional tissue paper patterns).

The pattern didn't call for really anything beyond the sewing machine, ironing board, thread, fabric, pattern, measuring tape, and scissors when you to it down to absolute basics. I really liked that it was just that simple!

In being that I can't climb stairs and I had forgotten to have hubby bring down rotary cutter blades (oops), I was stuck with a rotary cutter that wouldn't work, so I had to resort back to scissors. Let me just say ONE thing- cutting fabric is SO SO much easier with cutter and mat. I had forgotten what it was like to not use them, I won't forget any time soon! If you are novice sewer, GET them, and keep those extra blades handy. They will save you SO much time and aggravation!

I would recommend having your ironing board and iron set up right by where you are sewing to make the pattern go even quicker, as there is alternating between the ironing and sewing.

This pattern was really start to finish under 3 hours (how neat is that- make while darling is sleeping?)- it just took be longer between lunch, conversation with hubby and bathroom breaks. Also because I was a little rusty re clothing patterns. There was also the "issue" of a new sewing machine that I had taken out of the box and not used. May not be the best thing to sew a new pattern on a machine you have NEVER used! I couldn't remember the trick to using the needle threader on it, so I probably wasted 20 minutes yelling at the machine before giving up and doing it manually! But I got the hang of the machine pretty quickly and let me tell you, that Baby Lock Design Pro outdoes a Singer like you wouldn't believe! Now that I've made the pattern, I could probably knock another one out in less than 1/2 that time. This pattern is definitely on the keeper list!

Debbie's instructions were very clear. I would recommend printing them out in color, as it would be easier to understand the pictures with color. Because I wasn't using a second fabric, I also reduced the amount of fabric for the bottom border, and increased the length of the body by that much. It just worked better for me, as I knew I was going to use some white satin ribbon I had around the seam between the body and the band, to cover the connection of the two. I didn't use it around the seam from yoke (waistband) to the body, as a) I had used a short one and b) I know my daughter- she doesn't keep shirts tucked in, so it wouldn't be seen, so no need to do it. But again, these were simple alterations to the pattern that I made when I laid it out to cut it and realized what I would prefer, versus the pattern. Don't take this as bad, it's GOOD- a great pattern should allow you to make such adjustments based on YOU and still have the final result look like the one on the cover (i.e. what you bought it for)!

I finished the skirt just as my darling daughter came home from shopping with her grandparents and the first thing she said was "SNOOPY", and wanted to put it on immediately! SO it

She also had to practice twirling in it, as you can see (sorta see- she was a blur and the camera was upstairs, naturally, so I was using my cell phone's camera). But it did w 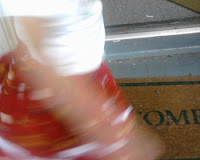 hat she wanted it to do-TWIRL-so she was a happy customer, as was I.

I am already eying the Twirly Quilt Jumper Pattern and the Pretty Peasant Dress, with the additions of ruffle sleeves, from Debbie's recent blog post.

The patterns are $10, which really is the same as what you would pay for a traditional pattern, but you don't have to worry about cutting out all those tissue paper pieces that always seem to get lost! And you get it right now- no waiting for the store to open- you want to sew, you can sew!

So go check out Twiggly Twigs Designs- anyone can sew these patterns, they're mistake proof!
product review sewing