We couldn't have Welcome to Fall Ya'll without a super Christmas idea for little girls,
and one that Kiddo adores: Prima Princessa!

Released this month is the third in the line of Prima Princessa ballet dvds: Prima Princessa Presents Sleeping Beauty. It is a 60-minute ballet show aimed primarily at children 3-6 years old. Prima Princessa, the animated ballerina, takes a group of young children to see a shortened version of the ballet The Sleeping Beauty, as performed by England’s famous Royal Ballet. Prima Princessa narrates the story of the ballet, so even the youngest of children can follow along. Between acts children are encouraged learn short and simple ballet steps, taught by students from the School of American Ballet (New York). Then they can dance along to a fun montage of music from Sleeping Beauty, featuring the ballet step they just learned. The adventure continues afterwards with a fun tea party and crafting bonus features, following the program. 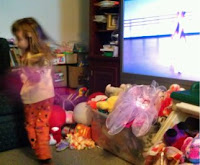 Review: As you know, Kiddo LOVES her Prima Princessa dvds! She loves to dance around the house in her tutu (we recently had to get her a new one, as she outgrew her Dorothy one finally!). What she may lack in finese, she makes up for in exuberance! Sleeping Beauty is not a story she had had read to her, so I was interested to see how she would react to it, as she picked the Aurora costume for Halloween (though she calls it her Pink Princess costume).

Kiddo takes after everybody else in the house- if it has a good plot, she's there! She was enchanted with it from the beginning! In fact on her first viewing she didn't want to get up and dance, she wanted to watch the rest of the ballet! YEAH TEAM! But it didn't take long before the music got to her and she just had to DANCE! As you can see, it was a tutu-less day. Staying up on tippee toes wasn't happening, but practicing her leg lifts and dance of the fairies (aka twirls) was! Kiddo loved having the extras afterwards as well and we have been having lots of tea parties already!


i can't recommend these videos enough for introducing your child to not only ballet, but classical music! Add a tutu and you have a super birthday or Christmas gift for your child! Any little girl will love any of the videos! So I am super excited to be able to offer a giveaway to one lucky BTHM reader!


Disclosure / Disclaimer:  I received this dvd, free of charge, from Prima Princessa, for review purposes. No other compensation, monetary or in kind, has been received or implied for this post. Nor was I told how to post about it either.
ballet Childrens movies DVD Review giveaway Prima Princessa Prima Princessa Presents Sleeping Beauty welcome to fall ya'll