October 22, 2013
Disclosure / Disclaimer: I received this book, free of charge, from Cadence Group Marketing, for review purposes on this blog. No other compensation, monetary or in kind, has been received or implied for this post. Nor was I told how to post about it

Keeping with our Halloween theme for the month, how about a book of Hollywood mysteries?

Adding to the suspense- I'm trying out the Giveaway Tools entry form, to see how you like it!
Let me know what you think in the comments below the post- better than Rafflecopter? Easier?
Extra points if you comment! 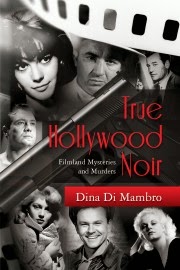 From 1922 until 2001, explore some of Filmland’s most fascinating mysteries, scandals and murders …true Hollywood noir lived by the players behind the scenes. From the West Coast mob and city corruption intertwining with Hollywood mysteries on and off the screen, to the plots of noir films pulled from actual happenings in the underworld, get the stories behind the stories. Get the theories behind each case in this page-turner—then draw your own conclusions as to the truth behind some of the most prominent Hollywood mysteries.

Review:
Mom took this one when it came in, as she's the old Hollywood movie buff!

Going back to the '20s, this book is about the celebrity murders that still leave lingering questions about what REALLY happened (like Natalie Wood- whose case was recently reopened- did she fall, or was she pushed into the water?) and those where there are still questions about relationships (like about George Reeves- was it suicide? How could there be 1 shot fired, per supposed 3 witnesses who heard it, yet 3 bullet wounds found on the body? Was there more going on that night?). If you've ever been interested in these type of stories, there may not be really anything new here to you. But if you have never read these tales, then the included evidence will having you shaking your head and wondering!

The author does a good job of piecing together the available evidence and sources (who may not have been interviewed before) and presenting them in a very factual, orderly way, so that the reader can draw their own conclusions. If you like murder mysteries and trying to solve them, you'll love this book!.

About the Author::
Dina Di Mambro is a film historian and entertainment writer who has worked as a research consultant for A&E Biography and "E" Entertainment Television documentaries. She started writing for Hollywood Studio Magazine and other publications while still in her teens. As a journalist, she has interviewed such luminaries as Glenn Ford, Shirley MacLaine and Dyan Cannon. As Dina-Marie Kulzer, she authored Television Series Regulars of the Fifties and Sixties in Interview, consisting of twenty-two interviews with classic television stars. It was praised by The TV Collector as "the kind of book that will elate baby-booming TV fans. The author has hand-picked a great bunch of classic television people for conversations about their careers—a handy addition to any nostalgia buff's library." She currently lives in Long Beach, California.

Want to win this review copy?