Book Review and Giveaway: Fallen For Rock by Nicky Wells

July 02, 2014
Disclosure / Disclaimer: I received this ebook, free of charge, from the author, for review purposes on this blog. No other compensation, monetary or in kind, has been received or implied for this post. Nor was I told how to post about it

Yup, Smmer is here and so is the latest from Nicky! 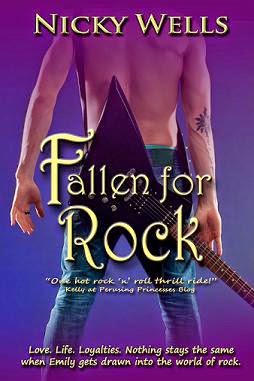 Synopsis:
Love, life, loyalties. Nothing stays the same when Emily gets drawn into the world of rock.

Glossy and sophisticated professional high-flyer Emily has no time for nonsense such as the rock music her ex-boyfriend Nate adored so much. Yet when she unexpectedly comes into possession of VIP tickets—access all areas—for new rock band phenomenon, MonX, she can’t resist the temptation.

The fateful gig turns into more than one night, and Emily finds herself strangely drawn to this new and unfamiliar glittery world. However, only weeks later, MonX and her own universe fall apart with devastating consequences for all. When MonX lead singer Mike appeals for her help, she reluctantly embraces a new opportunity. But she soon discovers that while she may be a rock chick after all, a groupieshe is not… Or is she?

Just exactly where do her loyalties lie? And what direction will her life take now that she’s left behind everything she treasured?


You have to love an author
a. that says "my characters are British, they live in Britain, therefore they 'talk' British. There will be extra vowels and different spellings. Deal with it! "
b. who declares Jon Bon Jovi the ultimate rock God (and styles her rockers on him)
c. thanks you, the blogger/reviewer in her Thank You section!

LOL- yes, I adore Nicky! She is an author you can bond with, and wish you had her lifestyle- she figured out how to blend rock n roll, writing, AND family together- and makes it look easy! LOL.

Now about the actual story-which is why you're reading this section:
First the warning-<1>Fallen For Rock contains some explicit sexual content and strong language, that may not be suitable for readers under eighteen years of age. So as much as you love the book, it may NOT be appropriate for sharing with your 14 yr old!

However, for consenting adults.....this is a modern romance in every word! It's your teen fantasies come to life, but in a mature way (ok, maybe not QUITE so mature, hello, it's based on every teen's fantasy?, but Emily has a real, serious, job, and worries about things like paying the bills and rent!). Emily is such a likable character- she could be your younger sister/friend/self?. Mike Loud comes off as the rock star he is at first, but once Emily gets behind the sheets  scenes, she gets to really know the true person (stay tuned after this post for a Guest Post from Mike and Nicky about being a rock God). I practically ran thru the book in just a tad over 2 hours, wanting to see how everything would play out in the end. Nicky always gives you an ending that makes sense, even if it may not be the one you were rooting for! That's the fun part of being an author I think- she can come back in the next book and totally show you her logic, and make you go "Yup, she was right"! This is the book you want for that afternoon with no kids and a good bottle of wine! Call it a secret indulgence, but just make sure you check it out! 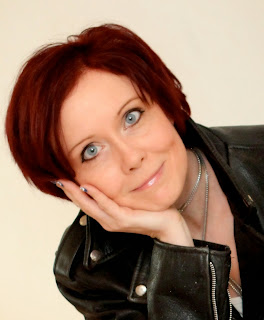 Nicky’s books offer glitzy, glamorous romance with rock stars—imagine Bridget Jones ROCKS Notting Hill! If you’ve ever had a crush on any kind of celebrity, you’ll connect with Nicky’s heroes and their leading ladies.

Born in Germany, Nicky moved to the United Kingdom in 1993 and currently lives in Lincoln with her husband and their two boys. Nicky loves listening to rock music, dancing, and eating lobsters. When she’s not writing, she’s a wife, mother, occasional knitter, and regular contributor at Siren 107.3 FM with her own monthly show. Rock on!

Did you know? There’s a single out now by Nicky’s fictional rock band Tuscq come to life! “Love Me Better” is available for download from Amazon, iTunes and many other places.

And now for the stuff you REALLY want, right?

To celebrate the launch of Fallen for Rock and to spread some joy, Nicky is giving away the following items: 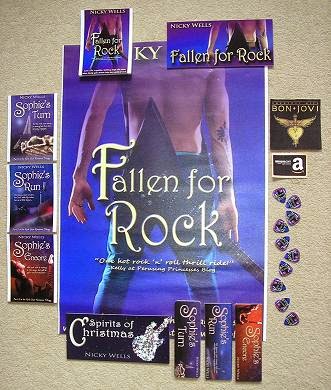 One Large Signed Poster of “Fallen for Rock”

One Set of “The Complete Nicky Wells Swag” (signed): Bookmarks and postcards for Sophie's Turn,

One Amazon Gift Certificate for £5/$7 or equivalent

PS- the blog post link is HERE for commenting!

The Small Print:
Giveaway is open internationally. Giveaway entrants must be aged 18 or over. Giveaway closes at midnight on 14 August 2014. Winners will be notified by email.

To Purchase this new book

Fallen for Rock is now available in e-book and paperback editions! Hooray!
Get your copy here:
Amazon.com | Amazon.co.uk 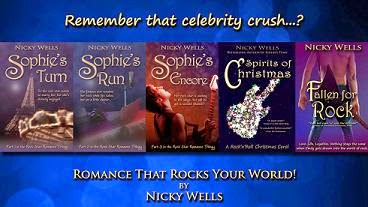