Guest Post: What Writing Means to Me by Ashley Farley

July 08, 2015
Disclosure / Disclaimer: I received this post, free of charge,from the author, for blog posting purposes on this blog. No other compensation, monetary or in kind, has been received or implied for this post. Nor was I told how to post about it

I hope you enjoyed are review of Her Sister's Shoes earlier today,
and entered our giveaway! 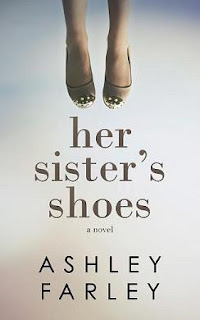 After my second child was born, I quit my job as a corporate travel agent and became the quintessential stay-at-home mom. When my children were little, I went on field trips and volunteered for every fundraiser the school organized. As the children grew older, I served on parents’ association boards and chaired leadership symposiums for the students. Somewhere along the line, my identity got lost in my children’s.


Just as a part of my soul got buried with my brother when he died of a drug overdose in 1999. I was a hot mess for many years after my brother’s death, stuck in a life that felt foreign to me. Unable to talk about my feelings, I turned to writing as a way of expressing my grief. I wrote Saving Ben in honor of Neal, the brother I worshipped, the man I could not save.


Not only was the writing therapeutic, enabling me to release the emotions I’d locked away for years, but the process of becoming an author, the classes I took online and the workshops I attended, helped me establish a new identity. I have a life again, one that belongs only to me, that I don’t have to share with my husband or my children, although I love it when my daughter reads my novels.


While Saving Ben is the coming-of-age story about a sister’s close relationship with her brother, Her Sister’s Shoes is a testament to my own midlife crisis. I turned fifty, became an empty nester, and


celebrated my twenty-fifth wedding anniversary all in one year. I portrayed some aspect of my life, some characteristic of my personality, in each of the Sweeney sisters. I shared my experiences dealing with aging parents through Lovie’s story.

I’m so fortunate to have found a new career, to be able to accomplish my goals, even if those achievements are meaningful only to me. Now, when I think about how I will live the rest of my life, I imagine the plots I will create and the characters I will bring to life. And, if I do my job well, the smiles on the faces of the readers I please.

Ashley Farley is a wife and mother of two college-aged children. She grew up in the salty marshes of South Carolina, but now lives in Richmond, Virginia, a city she loves for its history and traditions.

After her brother died in 1999 of an accidental overdose, she turned to writing as a way of releasing her pent-up emotions. She wrote SAVING BEN in honor of Neal, the boy she worshipped, the man she could not save. SAVING BEN is not a memoir, but a story about the special bond between siblings.

When she's not working on her next novel, she can be found book blogging at www.chroniclesofavidreaders.com.
#AshleyWFarley #iReadBookTours Ashley Farley Book Review guest post her sister's shoes