September 10, 2015
Disclosure / Disclaimer: I received this book, free of charge,from iTours, for review purposes on this blog. No other compensation, monetary or in kind, has been received or implied for this post. Nor was I told how to post about it

We're going to Theological History today this new book, subtitled A Theology for All Seasons on the 500th Anniversary of the Reformation, with our History Corner meme! 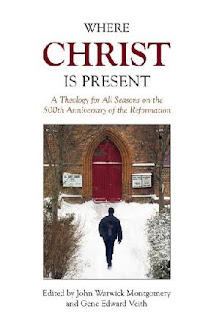 Five hundred years ago, the church of Jesus Christ underwent a Reformation.
A lot happened after Martin Luther posted his 95 theses on the castle church door in Wittenberg. But the fallout was not simply the start of Protestantism. The Roman Catholic Church also recast itself in response to Luther’s call for reforms. And contrary to common belief, Martin Luther did not set out to start a new church. Rather, he was trying to reform the church that already existed by reemphasizing its essence—namely, the “good news” (the gospel) that Jesus forgives and saves sinners.
The unity of the church was broken when the pope rejected this call for reform and excommunicated Luther, starting a chain of events that did lead to the institutional fracturing of Christendom and to a plethora of alternative Christian theologies. But, as many – including conservative Catholics – now admit, the church did in fact need reforming. Today, the church – including its Protestant branches – also needs reforming. Some of the issues in contemporary Christianity are very similar to those in the late Middle Ages, though others are new. But if Luther’s theology can be blamed – however unfairly – for fragmenting Christianity, perhaps today it can help us recover the wholeness of Christianity.
In the hope of that wholeness, Dr. Montgomery and Dr. Veith commissioned these essays celebrating the 500th anniversary of the Reformation, gathering some of the best contemporary voices the Lutheran church has to offer.
And we need these voices! The religious climate in the early 21st-century is simultaneously highly religious and highly secularized. It is a time of extraordinary spiritual and theological diversity. This book will propose the kind of Christianity that is best suited for our day. The remedies offered here are available by way of the same theology that was the catalyst for reforming the church five hundred years ago.

As Dad is the theologian in the family, he grabbed this book as soon the book came in!

This book is an amazing look at all that Martin Luther achieved over 500 years ago, and how it is still influencing the Christian church today. In this day and age, where Christian beliefs are being distorted so that no one is left out, we need to remember what Luther's Reformation was about-at its core, going back to the central beliefs of Christianity, based on the Bible. In this regard, this book is an excellent source for pastors, study leaders, and the like, to find the core of Christianity, that may be being left out. It is made for the seasoned theologian, so you need to have some theology background, to understand some of the references and it is not what we would call 'street easy' to read. It is harder read, that it is aimed at the learned theologian. This could be a stopping point for some people, but if you can keep reading, you will find the true core of what the Lutheran faith is about, and what the Lutheran faith is keeping sound,  in a time when many Christian faiths are changing,  and going against their core beliefs. They are changing their theology to again include everyone,  instead of saying 'no this is our faith'. This is a wonderful reminder of where Christianity is supposed to be, and is so timely, that I can't recommended it enough!

John Warwick Montgomery is the author of more than sixty books in six languages. He holds eleven earned degrees, including a Master of Philosophy in Law from the University of Essex, England, a Ph.D. from the University of Chicago, a Doctorate of the University in Protestant Theology from the University of Strasbourg, France, and the higher doctorate in law (LL.D.) from the University of Cardiff, Wales. He is a Lutheran clergyman, an English barrister, and is admitted to practice as a lawyer before the Supreme Court of the United States and is a practicing avocat, Barreau de Paris, France. Dr. Montgomery currently serves as Distinguished Research Professor of Philosophy at Concordia University Wisconsin.
Gene Edward Veith is the Provost and Professor of Literature at Patrick Henry College, the Director of the Cranach Institute at Concordia Theological Seminary, a columnist for World Magazine and TableTalk, and the author of 18 books on different facets of Christianity & Culture.
Connect with the authors:   Website  ~   Facebook   ~  Twitter

Ten winners will each win a copy of this amazing book!