March 01, 2016
Disclosure / Disclaimer: I received this ebook free of charge,from i Read Book Tours, for review purposes on this blog. No other compensation, monetary or in kind, has been received or implied for this post. Nor was I told how to post about it

Welcome to our spot on today's  book tour! 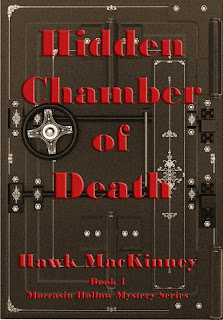 Hidden Chamber of Death is a compelling tale of intrigue, murder, deception and suspense that leads retired Navy SEAL/part-time private investigator Craige Ingram in search of the connection between seemingly random murders and a banking conspiracy.
​Working with the local homicide investigator, who just happens to be a former Navy buddy, Craige Ingram's attempts to protect a lonely widow and solve the case before another person dies are only thwarted by a psychotic killer whose motivation is based on pure depraved pleasure. In this first book of the MOCCASIN HOLLOW MYSTERY SERIES, the instincts and skills Ingram and his buddy acquired as Navy SEALS are tested to their limits.

This is a pretty quick read, as it flows very quickly, leaving you turning pages again an again! In a way, the book reminded me a bit of the old series, Magnum PI, in how Craig reached back to his military ways, links and friends, to help him solve the current mystery. Craig is a man you'd love to have around when trouble is afoot, and the way the mystery is solved will have you looking forward to reading book 2 in the series!

Internationally acclaimed author and public speaker, Hawk MacKinney began writing mysteries for his school newspapers. Following graduation, he served in the US Navy for over 20 years. While serving as a Navy Commander, he also had a career as a full-time faculty member at several major state medical facilities. He earned two postgraduate degrees with studies in languages and history. He has taught postgraduate courses in both the United States and Jerusalem, Israel.In addition to professional articles and texts on fetal and adult anatomy, Hawk has authored several novels that have received national and international recognition. Moccasin Trace, a historical novel, was nominated for the prestigious Michael Shaara Award for Excellence in Civil War Fiction and the Writers Notes Book Award. This was followed by the Craige Ingram Mystery Series. In a change of direction, October of 2012 saw the release of Hawk’s first science fiction novel, The Bleikovat Event, in The Cairns of Sainctuarie series. Volume II, The Missing Planets, was released in 2014 with Volume III in the works.