January 13, 2017
Disclosure / Disclaimer: I received this ebook, free of charge,from Witness Propeller, via Edelweiss,  for review purposes on this blog. No other compensation, monetary or in kind, has been received or implied for this post. Nor was I told how to post about it 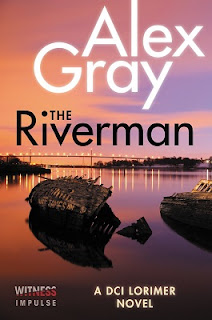 When a dead body is fished out of Glasgow’s River Clyde the morning after an office celebration, it looks like a case of accidental death. But an anonymous telephone call and a forensic toxicology test give Detective Chief Inspector William Lorimer reason to think otherwise. Probing deeper into the life and business of the deceased accountant, a seemingly upright member of the community, Lorimer finds only more unanswered questions.

What is the secret his widow seems to be concealing? Was the international accounting firm facing financial difficulties? What has  become of the dead man’s protégé who has disappeared in New York? And when another employee is found dead in her riverside flat these questions become much more disturbing. Lorimer must cope not only with deceptions from the firm, but also with suspicions from those far closer to home . . .

The riverman knew all about the Clyde. Its tides and currents were part of his heritage. His father and others before him had launched countless small craft from the banks of the river in response to a cry for help. Nowadays that cry came in the form of a klaxon that could waken him from sleep, the mobile phone ringing with information about where and when. It wouldn’t be the first time that he’d pulled someone from the icy waters with only a hasty oilskin over his pajamas.

This morning, at least, he’d been up and doing when the call came. The body was over by Finnieston, past the weir, so he’d had to drive over the river towing a boat behind him on the trailer. He was always ready. That was what this job was all about: prompt and speedy response in the hope that some poor sod’s life could be saved. And he’d saved hundreds over the years, desperate people who were trying to make up their mind to jump off one of the many bridges that spanned the Clyde or those who had made that leap and been saved before the waters filled their lungs.

George Parsonage had been brought up to respect his river. Once it had been the artery of a great beating heart, traffic thronging its banks, masts thick as brush-wood. The tobacco trade with Virginia had made Glasgow flourish all right, with the preaching of com-merce and the praising of a New World that was ripe for plucking. The names of some city streets still recalled those far-off days. Even in his own memory, the Clyde had been a byword for ships. As a wee boy, George had been taken to the launch of some of the finer products of Glasgow’s shipbuilding industry. But even then the river’s grandeur was fading. He’d listened to stories about the grey hulks that grew like monsters from the deep, sliding along the water, destined for battle, and about the cruise liners sporting red funnels that were cheered off their slipways, folk bursting with pride to be part of this city with its great river.

The romance and nostalgia had persisted for decades after the demise of shipbuilding and cross-river ferries.Books written about the Clyde’s heyday still found readers hankering after a time that was long past. The Glasgow Garden Festival in the eighties had prompted some to stage a revival along the river and more recently there had been a flurry of activity as the cranes returned to erect luxury flats and offices on either side of its banks. Still, there was little regular traffic upon its sluggish dark waters: a few oarsmen, a private passenger cruiser and the occasional police launch. Few saw what the river was churning up on a daily basis.

As he pushed the oars against the brown water, the riverman sent up a silent prayer for guidance. He’d seen many victims of despair and violence, and constantly reminded himself that each one was a person like himself with hopes, dreams and duties in different measure. If he could help, he would. That was what the Glasgow Humane Society existed for, after all. The sound of morning traffic roared above him as he made his way downstream. The speed of response was tempered by a need to row slowly and carefully once the body was near. Even the smallest of eddies could tip the body, filling the air pocket with water and sending it down and down to the bottom of the river. So, as George Parsonage approached the spot where the body floated,his oars dipped as lightly as seabirds’ wings, his eyes fixed on the shape that seemed no more than a dirty smudge against the embankment.
The riverman could hear voices above but his eyes never left the half-submerged body as the boat crept nearer and nearer. At last he let the boat drift, oars resting on the rowlocks as he finally drew alongside the river’s latest victim. George stood up slowly and bent over, letting the gunwales of the boat dip towards the water. Resting one foot on the edge, he hauled the body by its shoulders and in one clean movement brought it in. Huge ripples eddied away from the side as the boat rocked upright, its cargo safely aboard.

The victim was a middle-aged man. He’d clearly been in the water for some hours so there was no question of trying to revive him. The riverman turned the head this way and that, but there was no sign of a bullet hole or any wound that might indicate a sudden, violent death. George touched the sodden coat lightly. Its original camel colour was smeared and streaked with the river’s detritus, the velvet collar an oily black. Whoever he had been, his clothes showed signs of wealth. The pale face shone wet against the pearly pink light of morning. For an instant George had the impression that the man would sit up and grasp his hand, expressing his thanks for taking him out of the water, as so many had done before him. But today no words would be spoken.There would be only a silent communion between the two men, one dead and one living, before other hands came to examine the corpse.

George grasped the oars and pulled away from the embankment. Only then did he glance upwards, nodding briefly as he identified the men whose voices had sounded across the water. DCI Lorimer caught his eye and nodded back. Up above the banking a couple of uniformed officers stood looking down. Even as he began rowing away from the shore, the riverman noticed a smaller figure join the others. Dr. Rosie Fergusson had arrived.


‘Meet you at the Finnieston steps, George,’ Lorimer called out.

The riverman nodded briefly, pulling hard on the oars, taking his charge on its final journey down the Clyde.
**
Excerpt from The Riverman by Alex Gray. Copyright © 2017 by Alex Gray. Reproduced with permission from HarperCollins | WitnessImpulse. All rights reserved.

This is a really great addition to the DCI Lomax series! It can be read as a standalone as well though, as Alex gives the reader enough of a background, where you don't feel lost with the characters. In many ways it is a novel about 6 degrees of separation, and how the river was the basis for the first degree, in the different cases that Lomax is looking at. Finding out how seemingly different cases could or are linked requires the entire team, plus the help of their contract psychologist, to determine who the killer, or is it killers?, really is. It's a novel that reminds me of a good Agatha Christie novel. You think you know who the murderer is, ut then suddenly your theory has a few holes, and you have to re-think it. It's a novel that keeps the reader on their proverbial toes, and if you like mysteries, not one to be missed.

Alex Gray was born and educated in Glasgow. After studying English and Philosophy at the University of Strathclyde, she worked as a visiting officer for the Department of Health, a time she looks upon as postgraduate education since it proved a rich source of character studies. She then trained as a secondary school teacher of English.

Alex began writing professionally in 1993 and had immediate success with short stories, articles, and commissions for BBC radio programs. She has been awarded the Scottish Association of Writers' Constable and Pitlochry trophies for her crime writing.

A regular on the Scottish bestseller lists, she is the author of thirteen DCI Lorimer novels. She is the co-founder of the international Scottish crime writing festival, Bloody Scotland, which had its inaugural year in 2012. Check out his website,  http://www.alex-gray.com/, for more info.

There will be 3 US winners of one (1) PRINT copy of The Riverman by Alex Gray.

The giveaway begins on January 9th and runs through February 23rd, 2017.