Guest Post How Do You Keep Your Interest for a Character to Make Them Interesting to the Reader? by Alex Gray

December 03, 2017
Disclosure / Disclaimer: I received this ebook and giveaway, free of charge,from Partners in Crime Book Tours, for review purposes on this blog. No other compensation, monetary or in kind, has been received or implied for this post. Nor was I told how to post about it, all opinions are my own 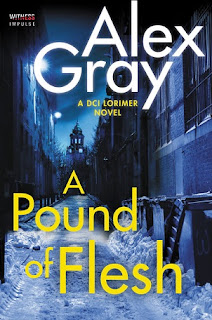 Welcome to our spot on the A Pound of Flesh by Alex Gray
book ending December 6, 2017

This is our second spot, and we're thrilled to be able to share a great Guest Post from Alex about the DCI Lorimer series!

This is a good question and one I am tempted to reply, "I don’t really know".

I think one’s main character is a bit like having a favourite friend. When you meet someone for the first time and know there is a spark between you, then the
impulse is to keep meeting that person, and gradually find out more and more
about him or her. Eventually you become so close, that you can anticipate their
individual responses, their moods and what they say or do. I think with each
book I am still finding out more about my character and his past, as well as what
he sees in his work, and personal relationships just as one would do with a close
friend.

DCI William Lorimer started out as “The tall man in the raincoat …” and to me
he was a shadowy figure I knew little about. Gradually, though, I came to see his
intellect, the fervent quest for justice and his relationship with wife, Maggie as
part and parcel of his character all elements making me want to know more. In
short, here was an attractive man who intrigued me!

With every successive book it was as though I was spending time inside
Lorimer’s mind as well as seeing him as a friend; an odd situation, perhaps, but
one with which any writer might identify.

Several decisions had to be made about this man and one that was made early
on was that he and his wife should remain childless. Why? I think I had found
detective series on TV and in books where families played a part in different
stories a bit over-the- top for my own taste. So, no familial distractions and
perhaps a reason for the couple to be close to one another and also have a tinge
of regret for their childlessness. So many fictional detectives appeared to have
broken marriages, drink problems and chips on their shoulders but the senior
cops I met during my years of research seemed to be generally nice blokes who
had good relationships with their spouses and, as a happily married lady myself,
I bestowed this on Lorimer and Maggie.

Another decision about each book was to show the different faces of my home
city, Glasgow and that also helped to bring a fresh perspective to the stories and
to my character. From the debut novel set in Glasgow’s Art world to the curtain
being lifted behind the scenes of classical music, then the machinations of
business life and even a soccer club, the first few books gave me a chance to
explore different things about Lorimer himself and to share his own varied
interests with the reader.

Just as Glasgow has many facets to its character so DCI Lorimer showed new
sides to his. It was important for me to write about a man who was a fully
rounded human being and not just a cop; too many books I’d read had
concentrated on the detective at work and little else and I was keen to expose my
man to the sort of situations any ordinary person might face in life.

So, we see his response when his mother-in- law takes ill and has to live with
them; we witness his reaction when Maggie undergoes the surgery that finally
ends all hope of motherhood; more recently my UK readers have been shocked
to share Lorimer’s trauma that almost finishes his career. (In “Still Dark”, book
14 of the series.)

It helps that I share some of my hero’s passions and one main interest is bird
watching. One day as I sat at my keyboard my son called to tell me had had seen Waxwings in the city. This was a bird I had always longed to spot. Leaving the
story behind, I rushed into Glasgow and to my everlasting delight watched these
glorious birds flit from tree to tree in the gardens of Blythswood Square, exactly
where my novel was set! It was too good a chance to lose and so the reader of “A
Pound Of Flesh” sees Lorimer taking a break from his office nearby to stand for a few moments watching the flock of migrant birds on a chilly winter’s morning.
Lorimer and Maggie also enjoy the sorts of vacations I like and so I borrowed my cousin’s cottage on the island of Mull (beginning with “Pitch Black”) and using it to much greater effect in “Keep the Midnight Out”).

I think with each new book I am finding out more about William Lorimer,
exactly as one would with a friend that becomes closer and closer as the years
roll by. Putting him in different situations keeps his character fresh and
maintains not just the reader’s interest but my own.

The day I find myself less than absorbed about this fellow will be the day I
think about writing a stand-alone or ending the series. However, I cannot
imagine that day ever coming and as I write the closing chapters of every book
there is a new idea, a new situation prickling at the edges of my mind, asking me
to delve deeper into Lorimer’s world and to explore his character more fully.
Long may that last and allow me (and my readers) to enjoy this intriguing man
more fully than ever!

This is a rafflecopter giveaway hosted by Partners in Crime Virtual Book Tours for Alex Gray and Witness Impulse.

There will be 3 winners of one (1) eBook copy of Alex Gray's SLEEP LIKE THE DEAD. The giveaway begins on November 6 and runs through December 10, 2017. 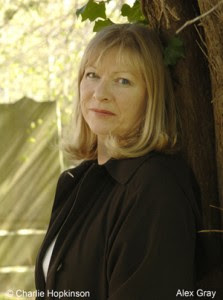 Alex Gray was born and educated in Glasgow. After studying English and Philosophy at the University of Strathclyde, she worked as a visiting officer for the Department of Health, a time she looks upon as postgraduate education since it proved a rich source of character studies. She then trained as a secondary school teacher of English. Alex began writing professionally in 1993 and had immediate success with short stories, articles, and commissions for BBC radio programs. She has been awarded the Scottish Association of Writers’ Constable and Pitlochry trophies for her crime writing. A regular on the Scottish bestseller lists, she is the author of fourteen DCI Lorimer novels. She is the co-founder of the international Scottish crime writing festival, Bloody Scotland, which had its inaugural year in 2012.

Visit the other great hosts on this tour for more great reviews, interviews, guest posts, and giveaways!