Book Review: Look For Her by Emily Winslow

January 05, 2018
Disclosure / Disclaimer: I received this ebook free of charge,from William Morris, via Edelweiss for blog review purposes on this blog. No compensation, monetary or in kind, has been received or implied for this post. Nor was I told how to post about it,  all opinions are my own.

Today we're going around the world a bit! 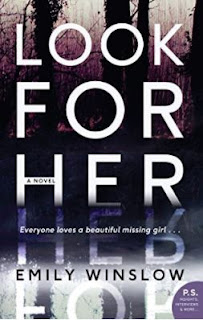 Lilling might seem like an idyllic English village, but it’s home to a dark history. In 1976, a teenage girl named Annalise Wood disappeared, and though her body was later discovered, the culprit was never found. Decades later, Annalise maintains a perverse kind of celebrity, and is still the focus of grief, speculation, and for one young woman, a disturbing, escalating jealousy.
When DNA linked to the Annalise murder unexpectedly surfaces, cold case detective Morris Keene and his former partner, Chloe Frohmann, hope to finally bring closure to this traumatized community. But the new evidence instead undoes the case's only certainty: the buried body that had long ago been confidently identified as Annalise may be someone else entirely, and instead of answers, the investigators face only new puzzles.
Whose body was unearthed all those years ago, and what happened to the real Annalise? Is someone interfering with the investigation? And is there a link to a present-day drowning with eerie connections? With piercing insight and shocking twists, Emily Winslow explores the dark side of sensationalized crime in this haunting psychological thriller.

Ah, the cold case file. Always sure to be full of surprises and errors in judgement. In this, the 4th book of the series, Keene and Frohmann suddenly have to deal with not 1, but 2 deaths, and double the mystery. Winslow gives the reader a page turner that you can't put down, as you seek to figure out where Annalise really is/was, and who really died. You get enough backstory that the reader never feels lost with the main characters, but instead leaves the story wanting to read the previous 3 books!

Emily Winslow is an American living in Cambridge, England. She is the author of the novels The Whole World, The Start Of Everything, and The Red House. Check out her website for more info.
Book Review ebook edelweiss Emily Winslow Keene and Frohmann series Look For Her