Disclosure / Disclaimer: I received this ebook, free of charge,from Amazon Publishing UK via Netgalley, for review purposes on this blog. No other compensation, monetary or in kind, has been received or implied for this post. Nor was I told how to post about it. All opinions are my own. 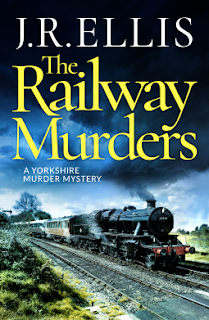 Synopsis:
When a film shoot on Wharfedale’s vintage railway turns into a grisly crime scene, DCI Oldroyd’s idyllic visit to the countryside with his partner Deborah is well and truly stopped in its tracks. One of the film’s stars has been shot dead in a train carriage while the cameras rolled outside. But nobody else went in—or came out. Has the killer really pulled off the perfect, impossible crime?

Scouring the victim’s past for clues, Oldroyd soon unearths a string of heartbroken lovers and a mountain of unpaid debts, each adding to the growing list of suspects. But before he can determine who the culprit is, there’s the small matter of figuring out how they did it. A potential connection to a previous tragedy offers Oldroyd a much-needed lead…

Whoever the perpetrator is, they are ruthless and determined to avoid detection, and when a railway worker starts joining the dots, they are quickly silenced—for good. But as Oldroyd gets ever closer to the truth, it’s only a matter of time before he is given a chilling warning to back off.

Review:
This is book 8 in the series, and offers a good update on the relationship between Oldroyd and Deborah. In this case, he is called in to help an old friend on his case, but soon finds himself and Deborah in the middle of the case, that seems to be one that Agatha would love, for it's closed train setting! As another body happens, Oldroyd soon finds himself searching for motif in the unlikely of places- the past. It's a pageturner that fans of the series will love, and newcomers will appreciate as well!
About the Author:
John R. Ellis has lived in Yorkshire for most of his life and has spent many years exploring Yorkshire’s diverse landscapes, history, language and communities. He recently retired after a career in teaching, mostly in further education in the Leeds area. In addition to the Yorkshire Murder Mystery series, he writes poetry, ghost stories and biography. He has completed a screenplay about the last years of the poet Edward Thomas and a work of faction about the extraordinary life of his Irish mother-in-law. He is currently working (slowly!) on his memoirs of growing up in a working-class area of Huddersfield in the 1950s and 1960s.