Disclosure / Disclaimer: I received this series/subscription/giveaway, free of charge, Momentum Influencers and Pureflix, for review purposes on this blog. No other compensation, monetary or in kind, has been received or implied for this post. Nor was I told how to post about it, all opinions are my own

Earlier this week I told you about a great show that came out earlier on Pure Flix, called Vindication. 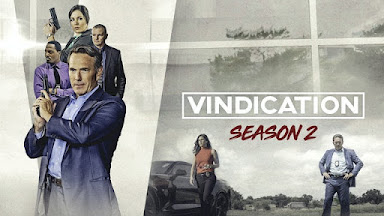 This month, Vindication  has returned for Season 2, with new episodes every Wednesday

Check out the Trailer for Season 2 before I tell you more about it!

I recently got to watch Season 2, Episode 1- Precincts and Prisoners 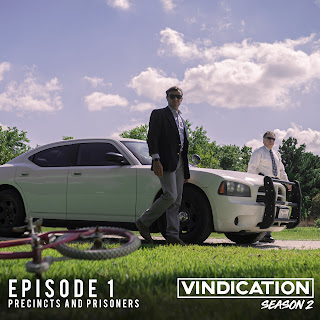 In this opening episode, Gary and Becky Travis adapt to new chapters in their life, amidst an investigation into mysterious activity on a single mother's property. Gary's police department has been splint into 2 precincts and he seems to have the 'rejects', and Becky begins working as part of a prison Faith Squad, praying with prisoners. Both of them are looking at changing lives, one at a time, but in different ways. Their daughter had had her child and moved away to the big city, and they moved to a smaller house and are on the path of changes. But as we know, nothing ever goes as we hope, when we plan. In our house, we call that the "God has a sense of humor, and thinks you need some drama", LOL.

Watching with the kid, she felt like Season 2 has a more real life spin to it, versus Season 1. Characters have deep seated hurts, that still come to the surface, there are still hiccups and bumps in the road, and people look for the easy way out. The kid and I had a long discussion over where the characters could have taken different paths, and what might have occurred.

In fact, she was quite adamant that there was no way such lackluster police work would have been allowed to continue, and felt like that part wasn't properly portrayed- "with everyone with video cameras on cell phones, I think the Chief would have known all about the officers not doing their jobs, and they would have been disciplined or fired- it shouldn't have been up to Gary. She also questioned how Gary would not have known who was at the local prison, and if he would have let Becky be part of the faith group. For a 28 minute show, it produced about 90 minutes of discussion!

You know it's funny-teens go through phases where their faith isn't very strong, but the one thing that has kept her ember burning are shows like this one, where she sees faith being protrayed, as she sees it in her small town life. I think teens see faith as seemingly 'uncool', but the rise of shows like Vindication will really HELP them to understand that faith is always with us, no matter what phase in life we might be in!

Pure Flix is an amazing channel- with wholesome content for ALL ages, that not only is enjoyable to watch, but leads to interesting family discussions and strengthening of the foundations of our faith! Just look at all the series and movies above, that are part of their EXCLUSIVE line up- you know these are shows you have heard about and wanted to see! So I'm thrilled to be able to offer you an amazing giveaway, worth over $60!

One lucky BTHM reader will win a 6-month Pure Flix subscription, to check out all the great shows like Vindication on the channel!

But HURRY to enter, as this give away ends early on the 27th!